2008: Mom's 70th Birthday Surprise Party (note: you can click the slideshow to go to the album)

This surprise party was conceived by Dad almost 2 months before Mom’s birthday (October 25th). He commissioned Dori to plan and arrange the event so that it would remain a secret and therefore a surprise for Mom. Dori enlisted Marie’s help and together the two of them made all arrangements. My only part (Eugene) was to arrange for Tracy Christensen to provide entertainment and his big screen for the slide show and to create this slideshow. Marie arranged with Tim Andrea to also perform on guitar and for the Boise Fire Kittens, led by Karissa to do their fire spinning. Mr. and Mrs. Street arrived early to help with setup. I think we had about 50 guests or more and it looked like a good time was had by all.
Eugene Boyle (November 1st, 2008)
No comments:

Would you let your kid do this? 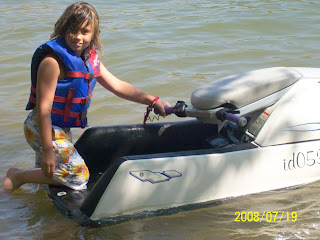 It's nerve racking to say the least! 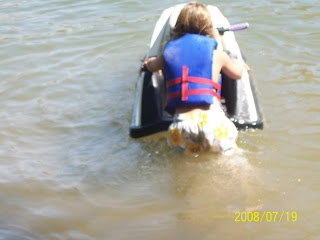 That being said it took about 15 minutes for him to get the hang of it and pretty soon he was zipping all over the place.

Chance shows that he can indeed walk on water! 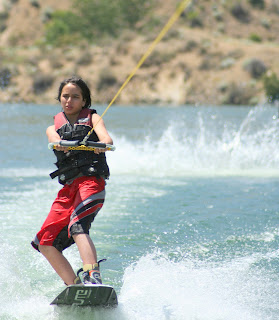 Cody & Vicki (along with Cassidy & Tristan) invited us up to the lake. Chance was his usual cool self on the wakeboard. Luc got his first opportunity to to get on a jet ski and he took to it like he was born on it.

My dad sent me this clip from his on-going biography of my boys. It was a day and a series of long terrifying minutes for me that turned out well. I might return to this in the future and blog about some of the more personal aspects of this story. Luc was 8 yrs old at the time:
By: Howard Boyle
Eugene, Dori and family were on a campout at Lucky Peak and we (Mom and I) were invited to go up for a visit and for Father’s Day. When we arrived there (June 17, 2007) Eugene told us a story that sent shivers down my spine. Seems that the day before, (June 16, 2007) Eugene heard James, a friend of Luc’s who was along for the trip, screaming. He was in the water and flailing and at first, Eugene thought that James might be fooling around. Finally, Eugene realized that James was not fooling. Eugene also saw Luc swimming toward James. Luc was wearing a life jacket, James was not. However, when Luc reached James, James, in a panic mode, grabbed hold of Luc and because James was quite a bit heavier, was actually pulling Luc under. Eugene dove into the water and started for the boys, but suddenly developed shortness of breath and couldn’t get to them. A stranger standing nearby, dove into the water, reached the boys and grabbed hold of James. As soon as James let go of Luc, Luc was able to swim back to the shore. Eugene also swam back to the shore with the help of a preserver that Dori had thrown out to him. Perhaps because of smoking, or perhaps due to a panic situation, Eugene was unable to reach Luc. He was completely out of breath. Thankfully though, all turned out well and to all who heard the story, they realized, Luc was, and is, definitely a hero. I hope that Eugene will think very seriously about quitting smoking. We should all give thanks to God for the stranger who happened to be nearby
No comments:

Eugene Boyle was born and raised in the South China Sea and claims the Treasure Valley in the Gem State as his home. Eugene is a son, a friend, a husband, a father and a Peaceful Warrior.